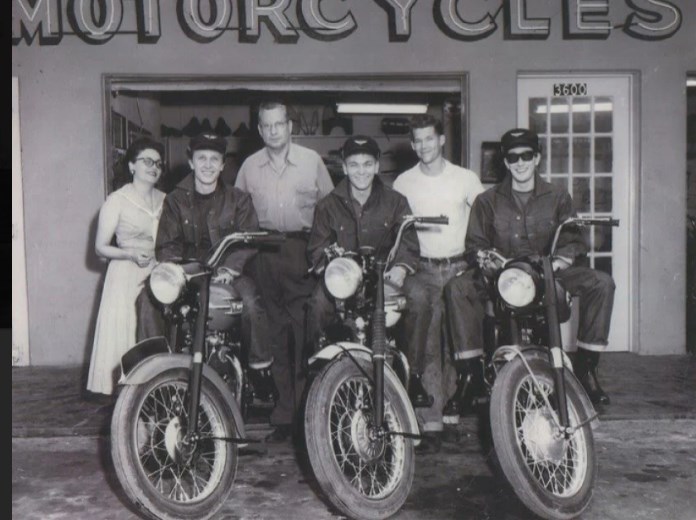 It is said that Buddy Holly & The Crickets were on the top of the lists with That’ll be the Day and they were back in Dallas (Texas) after their world tour when they decided to buy 3 new Harleys in Dallas that would take them 300 miles back to home in Lubbock (Texas), but the Harley distributor  didn’t recognize them and refused to take them seriously, 3 young boys looking like that they didn’t have enough money to pay one of those new motorcycles … and they were asking for nothing less than 3!!. The boys left Harley’s store with a good anger  and went to a Ray Miller’s Triumph-Ariel dealership, where Miller sold to the bass player Joe Mauldin, one of the new Triumph Thunderbird models, to the drummer Jerry Allison, a Triumph Trophy and Buddy Holly chose one of the new Ariel, the Ciclon 650cc de 1958, of which just 178 were manufactured. After that, the 3 approached Harley’s shop and parked at the door leaving the owner stunned, before returning home  in Lubbock during a thunderstorm.

The following year, 1959, Buddy died tragically and his Ariel ciclón went through several hands, family, friends, the other Crickets, and even Waylon Jennings. Finally it was sold at auction in 2012 for 450,000 $ y is now in the Buddy Holly Center in Lubbock TX.