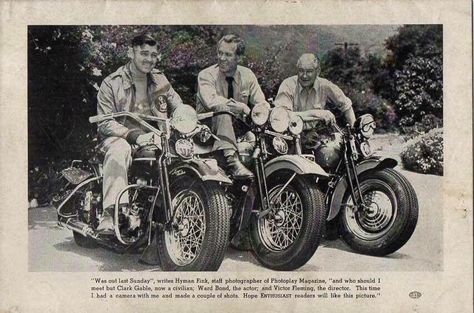 We all know that Clark Gable was a great actor, but that it was also a real motorcycle fan, is nowadays a forgotten data by the majority of people. He rode a motorcycle from the 20’s until the end of his life.
After his the tragical death of his life’s love, Carole Lombard, Clark Gable, totally devasted, they say, never was the same again, He took refuge even more on motorcycles and speed, to the point that MGM studios forced him to sell his motorcycle as they feared for his life.
Absolutely broken, Gable, as he also was a aviation passionate, enlisted in the US Air Force from the RAF, in Polebrook England where he participated in 5 combat missions, one of them in Germany, between Mai the 4th and September the 23rd on 1943, wining some awards. He left the Air Forces as a commander.
After the war, one of the first things tha he done was buying a new motorbike to continue with its passion.
This photo was taken in 1939. Next to him appear the actor Ward Bond and the director Victor Fleming (Gone with the Wind).