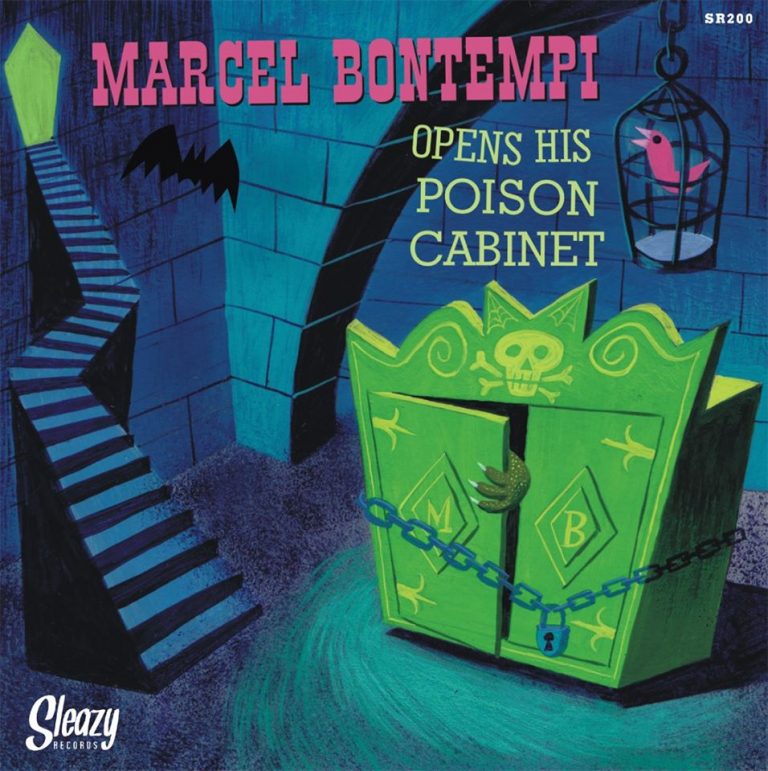 What a wonderful album!! The new Marcel Bontempi’s job is a true luxury, both in its musical part, as well as in the graphic and design aspects. Marcel has accustomed us to some magnificent and well-kept folders, with an unmistakable style, but this time he has taken his art a step further. The single that has just been released by Sleazy Records, commemorating its 200 references in 7” format by Marcel Bontempi is a real gem. It is a single with a double folder that hides a very cool pop up, I do not remember any Rock & Roll single with these characteristics, of course the work of Marcel Bontempi. In addition to a unique design, the single has two incredible themes. On the A side, a version of the theme popularized by Barbara Pitttman “Handsome Man”, renamed “Handsome Girl”, the version of Marcel is more accelerated than that of Barbara Pittman, it has more swing and moves away from the Popcorn style of the original. If the DJs have a little common sense, they will turn this song into a real track-breaker. Marcel plays all the instruments and puts the solo voice on this magnificent version, which has the collaboration of the group of Doo Wop from Barcelona, ​​Velvet Candels, who put a finishing touch to this theme with their magnificent vocal harmonies. On the B side “Gonna Have Myself A Ball”, a song composed by the Boudleaux / Bryant tandem, recorded in 1959 by Lance Roberts for the Decca label, should not be confused with the song by Tini Bradshaw or Malcom Yelvingtong. The original version of the song is a magnificent Rockabilly jiver, but Marcel’s version makes you think about how this song would have been if instead of 1959, Lance had recorded it in 1964-65, with a sharper guitar, and a rhythm Plus Beat, which brings it closer to the first-time Garage, with this treatment Marcel makes it totally his, mixing perfectly, as only he knows how to do, Garage and 50’s Rock & Roll. This song could be perfectly in the repertoire of The Montesas.

In summary, an essential single for collectors and fans in general that will not leave anyone indifferent, and from Poison Ivy Lovers we highly recommend you. We can only congratulate Sleazy Records for those 200 references, and wish them at least 2000 more