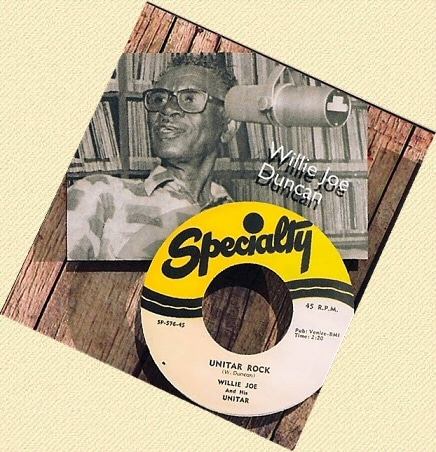 Willie Joe Duncan is one of the darkest guitarists of the 50’s, and everything he has in darkness he has in fierceness and rawness.

Joe Willie Duncan was a Detroit blues musician who played a single-stringed instrument he called the Unitar, this instrument was electrified and was a variation of The Diddley Bow, customized by Willie Joe. This curious instrument consisted of a wooden plank over 2 meters high, on which he had strung a wire string that was connected to a DeArmond acoustic guitar pickup. The instrument was played with a bottle as a slide, but Duncan used a piece of leather to be able to hit the string and create a strange sound close to the Slap.

In the late 1940s, Duncan and his strange guitar, became associated with the legendary blues musician Jimmy Reed, author of such hits as “Big Boos Man”, “Bright Lights Big City”, “Shame, Shane, Shame” or “Baby Whant you Want Me To Do”. Jerry and Willie Joe would perform in any store, joint or street corner in Detroit where they were allowed to play.

The couple became very popular in Detroit, mostly thanks to Duncan’s instrument, which attracted a lot of attention. If there was a place to plug in their instruments, they already had a stage. Reed played the guitar and sang. Willie Joe played his Unitar and sometimes also sang, in addition to playing the spoons, as percussion in some songs.

For a while Reed and Willie Joe became very popular in Detroit, but Willie Joe decided to move to California, where he thought he would have many more opportunities than in the Detroit ghettos. But before he left Detroit, Reed gave him a portable Unitar for the trip, with a hinge on the instrument, making it foldable! Willie Joe settled in Palo Alto and continued his street shows. He became very popular in the city because he was the only black man who dressed like a cowboy, and rode around town on his Unitar.

In 1956 Rene Hall, the leader of the band that accompanied the Specialty Records artists, discovered Willie Joe Duncan by chance. In 1956 Speciality was at its best, they had Little Richard, Lloyd Price, Guitar Slim or Etta James on their payroll, among other giants of Rock & Roll and R’n’B. In Specialty they thought that Willie Joe and his Unitar would be ideal to accompany Bob Landers, a singer who had a song called “Cherokee Dance”. Landers had a somewhat peculiar voice, reportedly because he had suffered from throat cancer that had left his vocal cords a bit spoiled, this distinctive voice had earned him the nickname “The Frog”. Landers died shortly after the song’s release.

The B-side of this single hides an original Willie Joe instrumental “Unitar Rock,” a one-liner that Duncan makes his instrument howl in a hellish way. In this track, it’s Specialty’s band that accompanies Willie Joe. I think this issue opened the way for, in a few years, songs like “Rumble” by Link Wray, could succeed.

In 1957 Willie Joe was required again by Specialty, as a studio musician, playing in the single of the label the instrumental “Twitchy” by Rene Hall. In 1958, Hall left Specialty and signed to Rendezvous Records in Los Angeles. Hall enlisted the services of Willie Joe and his Unitar to record Ernie Field’s “Teen Flip” in 1960.

During the rest of the 50’s and 60’s, Willie Joe Duncan appeared regularly on local TV shows alongside figures such as Johnny Otis and Hunter Hancock, alternating these performances with concerts in local bars.

It wasn’t until 1985, when Little Willie G, who had a radio show in Los Angeles, rediscovered him to the world, asking him to perform on his radio show, that Willie Joe gladly accepted and offered a magnificent show, playing some of the songs he had recorded on Specialty, such as “Unitar Rock”. Unfortunately, Willie Joe died 3 years later, but still Willie Joe’s legacy has reached a small section of musicians of our days, perhaps the best known of these musicians was the late Grunge musician Mark Sandman, who had a two-string bass built that copied the sound of Willie Joe’s Unitar.

There are 3 or 4 songs from 1988 recorded in Palo Alto, which run through YouTube in which we can hear Willie Joe Duncan, in top form, playing his own songs and some version of Jimmy Reed and Muddy Waters, in these songs he’s accompanied by Chester D. Wilson and Willie G spoons.