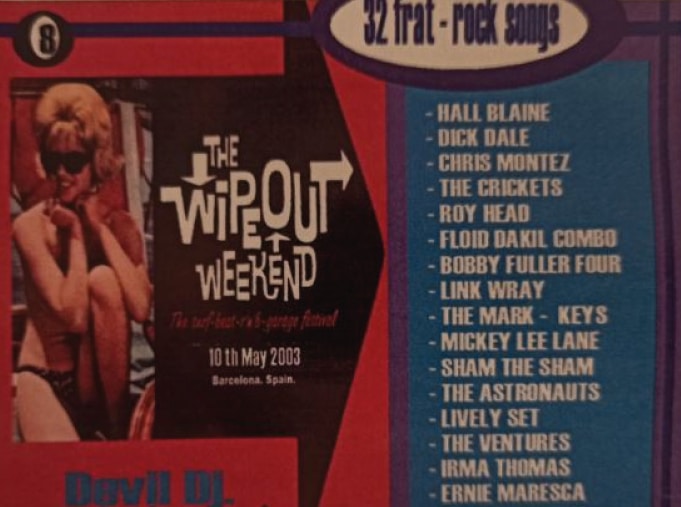 A few days ago, my friend and partner in Poison Ivy Lovers, Toni Acarreta, surprised me when he coincidentally found a cd of one of the sessions that 17 years ago I made for a festival that perhaps nobody remembers today, but yes, in 2003, in the same place where for years the Screamin’ festival has been held, the Llobet factory in Calella. A pioneering festival in its genre was held, the Wipeout Weekend, a festival of Surf, Beat, R´n´B and Garage, which had in its first edition an unusual poster within its genre. It was a festival well ahead of its time, the first of its kind to program such a important bands in Spain. This festival had only two editions, was organized by El Toro Records and Just For Fun, and I had the immense pleasure of DJing on Saturday, from 7:00 p.m. until the end of the concerts at the Llobet factory, and later as first DJ at the Western Saloon. I have never been a Dj, what I have always been passionate about is the radio, I have played very rarely in events, only in some small parties for Friends and in a concert for some group of Friends and I really don’t like doing it, I feel very corset, I prefer the radio where I’m free in terms of formats and themes, and also there were already many people who were doing it much better than me.

At this time, they proposed it to me, and normally, I would say no, but this time I accepted, I was very excited to play my favourite musical genres while watching some of my favourite bands. In those years it was not very common to hear these types of sounds in the Spanish rockin’ scene, bands of that style had no place in the 50’s Rock & Roll festivals. I have always been a follower of all these musical genres, I don’t differentiate between 50’s Rockabilly, Surf, Frat Rock or Merseybeat, they are all brother genres of the same family in my musical likes. In the poster I appear as “Devil & Angel” because, at first, the session should have been a tandem with my friend Angel, but due to an indisposition, only Devil attended the appointment.

It’s not a selection of rarities, many of these songs are now classic in the Dj’s, but in 2003 it seemed somewhat new. I hope you will enjoy it.